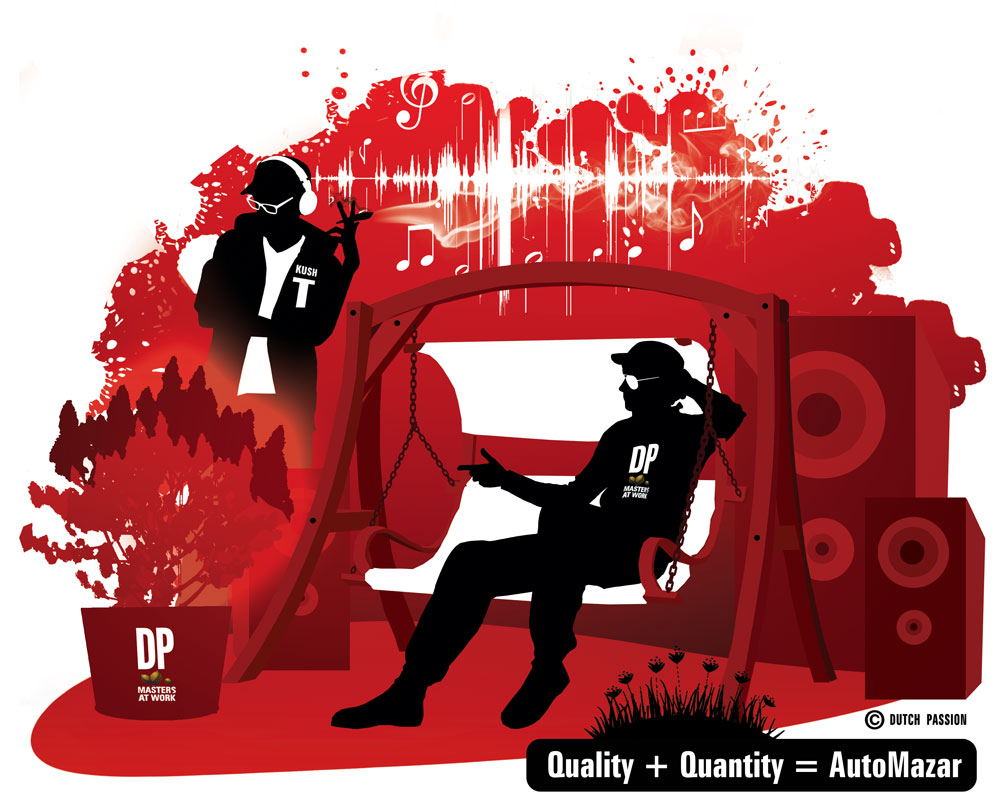 This week our blog reviews a very special AutoMazar grow by KushT.  The plant is one of the best we have seen, yielding over 300g of top quality pot from a single plant grown in deep water culture (‘DWC’) under 500W of LED light.  The original grow diary is courtesy of Autoflower.net.

DWC is a technically challenging grow method, but if done properly it can produce epic results.  AutoMazar is still Dutch Passion’s best selling AutoFem, with many repeat growers.  She produces great quality pot and has the genetics to combine quality with massive yields. 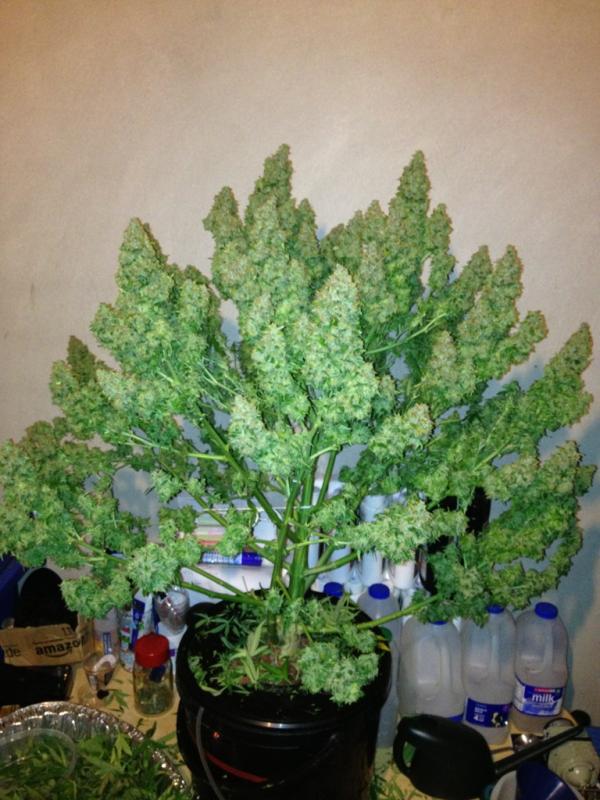 KushT used a 20 litre DWC bucket with a 60 litre/minute air pump to provide maximum root aeration.  Expert auto-growers often focus on 2 key areas to produce special plants.  They like to combine optimum light levels for the leaves/buds, but they also like to focus on the creation of a large, well-fed root system.

In this grow the root ball filled the 20 litre bucket and allowed the plant to produce a generous number of very big (and long!) blooms. KushT used the 3-part ‘Genesis’ nutrients and by the end of the grow he was feeding the AutoMazar with an unusually high nutrient concentration of EC 3.0, much higher than we usually see.

Only 2 other nutrients were used, Carboload and a pK boost.  The combination of intense LED light, a large well-fed root ball and great grow skills KushT helped produce a real monster AutoMazar. 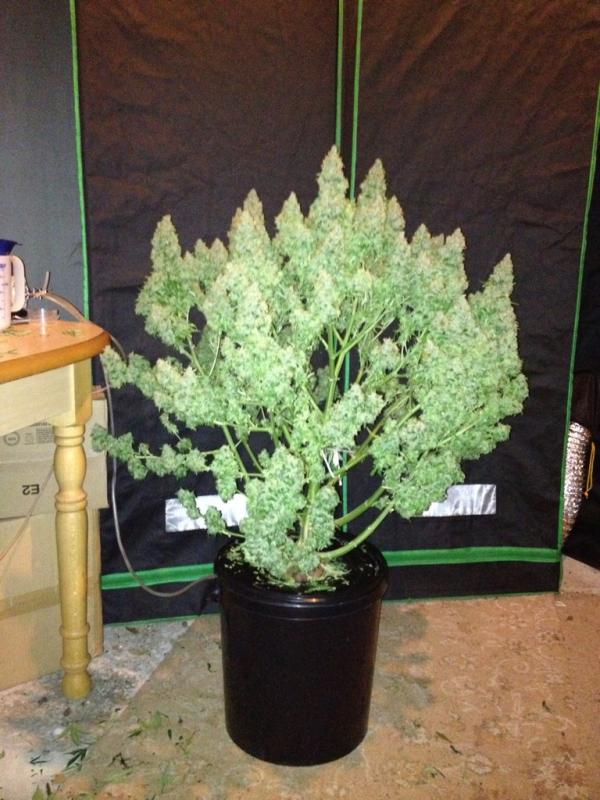 This grow was unusual because the growing tip of the AutoMazar was removed on day 28.  This is a technique known as ‘topping’ and is often used by growers of traditional cannabis varieties to produce bushier plants which do not grow as tall.

This technique is not generally used by AutoFem growers as it will slow the plant down for a few days while it recovers.  But on this occasion KushT has shown that topping can produce special results even with AutoFem’s.

“Her growth was vigorous with very strong and dense side branching. Structurally she was a very pretty cannabis plant (aren’t they all?) with extremely dense foliage. The plant was almost too dense… crazy dense.  Would I do anything differently if I grew AutoMazar again? …”

“I don’t know if I’d top an AutoMazar again, not that it didn’t pay off, it just made an already dense canopy even denser. I would also make sure airflow to her roots was perfect next time, at the start of the grow the air pump was being shared with an AutoBlueberry resulting in poor air-flow for the AutoMazar roots which suffered slightly as a consequence.”

“I made a good few errors with her; she didn’t care and just carried on regardless. An awesome strain for growing. Excellent work Dutch Passion.  The high starts quite cerebral & heady, but quickly advances to what I’d consider a more indica type stone.”

“Couch-lock can be attained pretty easily. What it will be like in a month or two in the jar… Could be knockout! So basically it’s a thumbs up from me… on all fronts, I can’t fault her at all.  I can see why AutoMazar is Dutch Passion’s best selling auto.“ 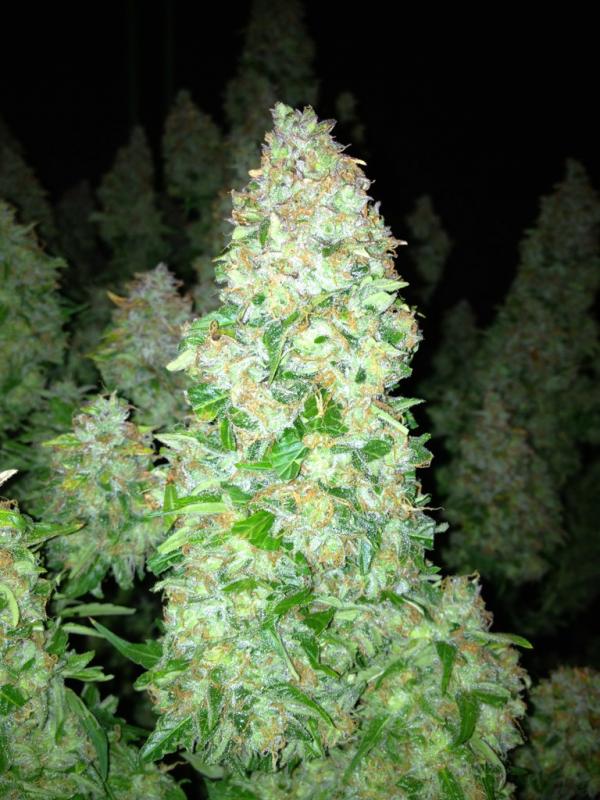 A close-up of one of the solid AutoMazar blooms.

Dutch Passion congratulate KushT for cultivating the kind of plant that all home-growers dream of, he invested in his grow-room equipment and took the AutoMazar genetics to their limit. It was a quite special grow and shows why an increasing number of home-growers find growing AutoFem’s such a rewarding experience.

The final words go to KushT, here is his advice to anyone thinking of growing AutoMazar.

“Do it!! Ha ha you won’t be disappointed. She is hardy & produces the goods. Lots of rock hard buds!! What’s more to say?”