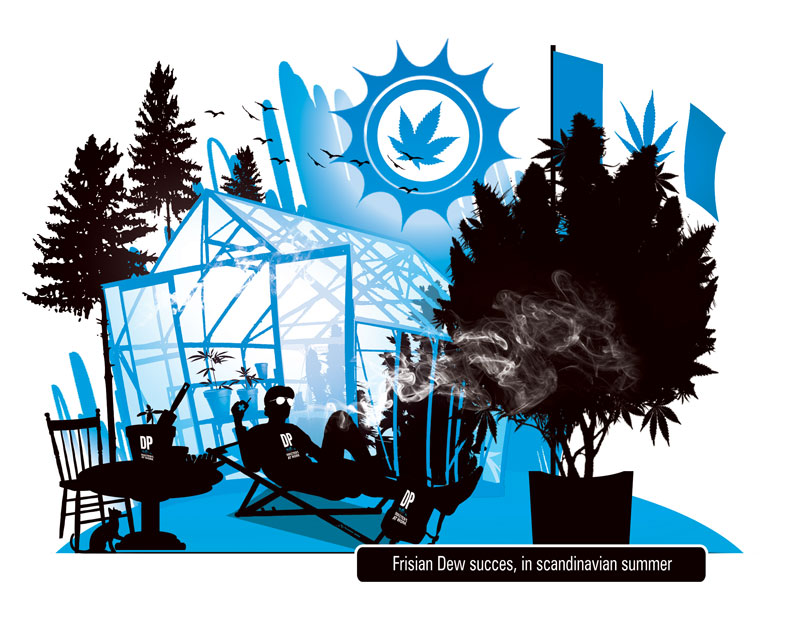 This weeks blog shows you a guide for growing large outdoor cannabis plant. Its not complicated or expensive, read on to see how Danish George got such a good result in Scandinavia. The words and pictures are from Danish George.

Danish George grew a Dutch Passion Frisian Dew plant outdoors in Denmark during the cool and cloudy northern European summer of 2017. In October he harvested 450g of dry cannabis buds from his plant. Growing feminized cannabis seeds outdoors is easy, simple and cheap if you prepare correctly and use proven outdoor cannabis seeds. 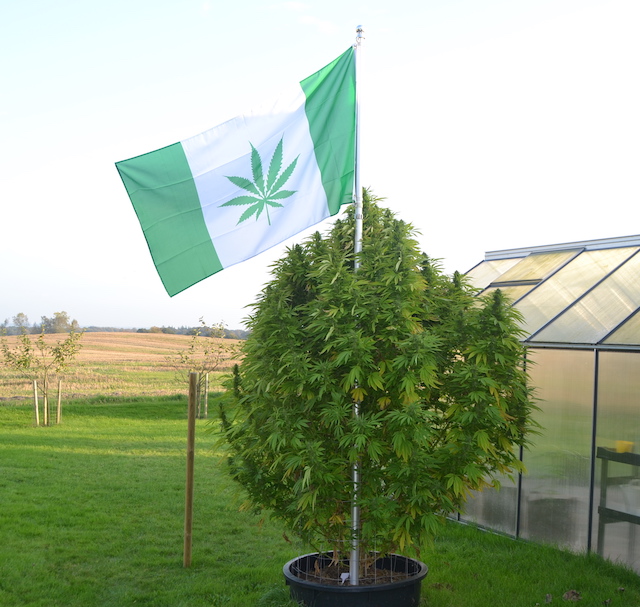 “If you have ever seen the legendary grows of Mr. Greenskell in Canada (if not, check it out here), you would probably not only be totally in awe over such great results, but hopefully also be inspired to give it a go yourself – at least I did.

And so, after a bit of planning, and buying a few items, I started out in the middle of April for a grow, that I didn’t expect to be as great as Mr. Greenskells, but at least hopefully the biggest and best yielding plant I had ever grown. With limited personal experience with the various methods of yield improvement I decided to let the brute force of the Frisian Dew genetics do the whole job in a 100% natural way, and just make the plants environment as optimal as possible.

I figured that with the best container I could get, the best growing medium from the garden shop, and the best placement in the garden (considering neighbours view, wind etc) the only thing needed during growth would be water, sun and some top line fertilizer.

Little did I know at the time, that 2017 would later turn out to be the least sunny and coldest ‘summer’ for many years in Scandinavia, and most of northern Europe.” 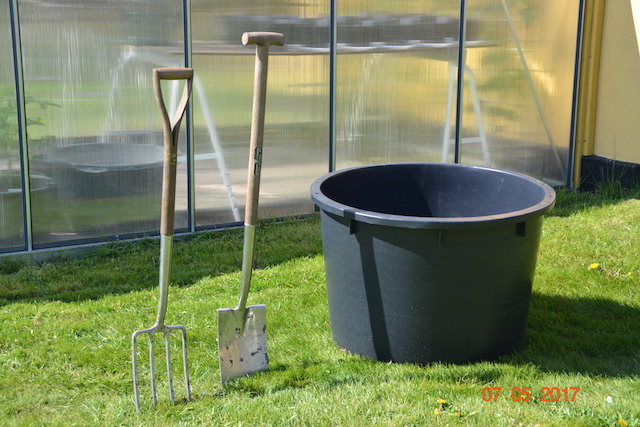 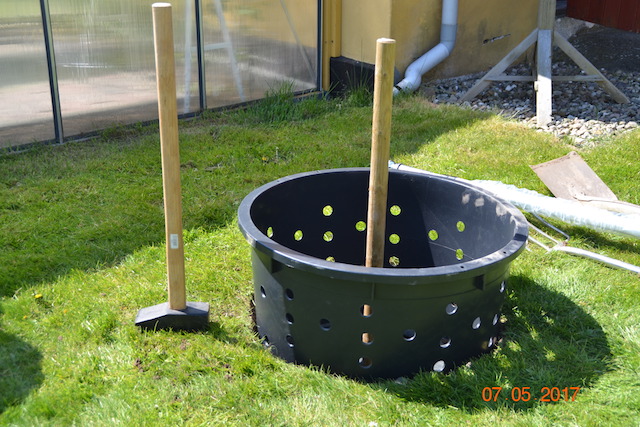 “Well, then just dug a big hole in the ground for the 300l feeding trough for small cattle that I got at the farm shop. I made the hole a good bit deeper than the trough, so the roots could go through the bottom, and the plant itself would be raised a bit, to protect the young plant from the lawnmower, and various other dangers, as dogs, cats, and hopefully slugs and other pests.

It all went according to plan. The single feminized seed was germinated and sprouted, and then spent its first 2-3 weeks in the greenhouse and then planted out in the lovely May weather we had at the time.

Having grown mostly autos in the last couple of years, it was funny to look at the plant and realize that it wouldn’t be ready for harvest till 5-6 months later.” 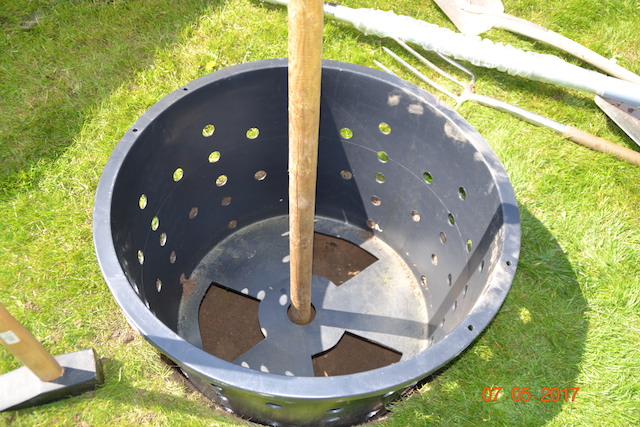 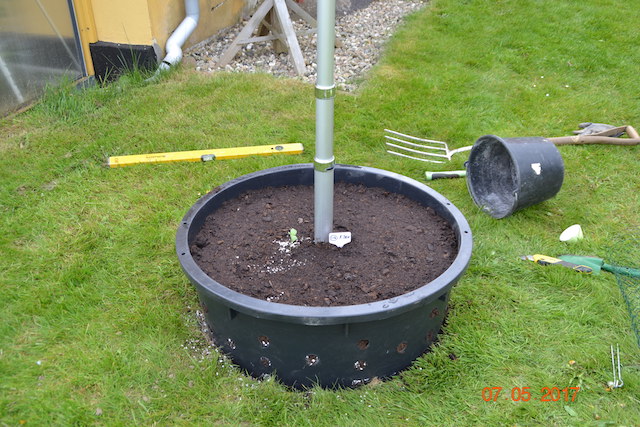 “The plant grew and grew wonderfully while I planted and harvested my first batch of autos in another area of the garden. The weather still was fine, though a little to the cold side we thought (but it later turned out, that this WAS the years summer).

True to my first notion, I didn’t trim it much, or at least not in any radical way like top trimming or fimming. The plant rewarded me by soon turning to a giant Christmas tree shaped bush, but in July/start August there were not yet any buds.

The weather didn’t ever turn into a hot late summer, my second auto batch were beginning to show signs of both bud rot and powdery mildew, but the Frisian Dew just took it all in her stride.

It had had a good deal of good compost in the earth-mix, which was the only N-dominant fertilizer, and when I thought the time was right I started with Dutch Pro bloom A+B for the flowering phase.” 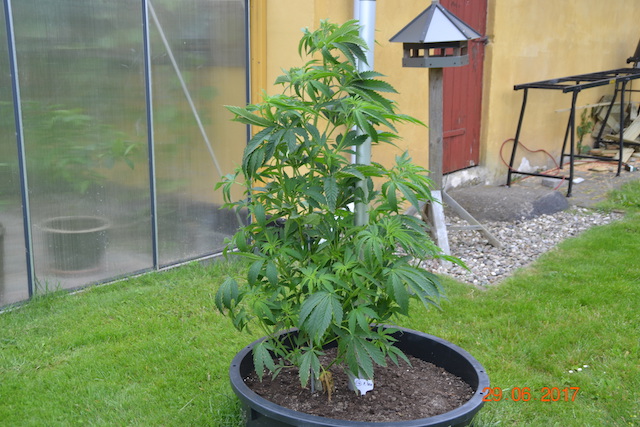 A difficult Scandinavian summer, but a good Frisian Dew harvest

“My second batch of late-season autos had mostly turned into a ‘no harvest situation’ due to cold, rainy and windy conditions, which gave the rot and mildew optimum conditions, so the mood wasn’t too great, except for my hopes for the Frisian Dew, which was my only hope for getting an autumn harvest this year.

The buds finally started to form, and I did all I could to protect my final asset from the strong easterly winds we get in early autumn. These, as it turned out, were joined by an unusual early onset of the fall storms from the west.” 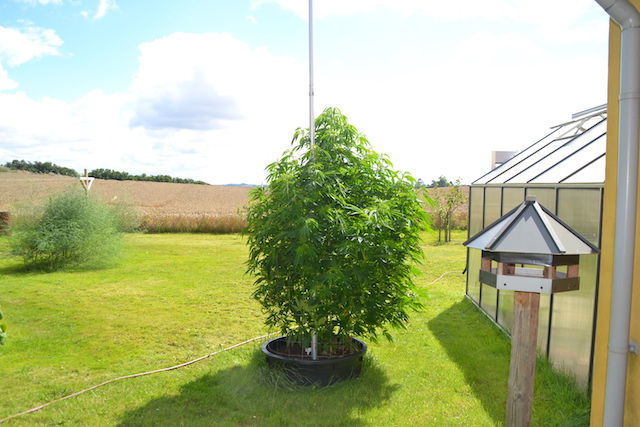 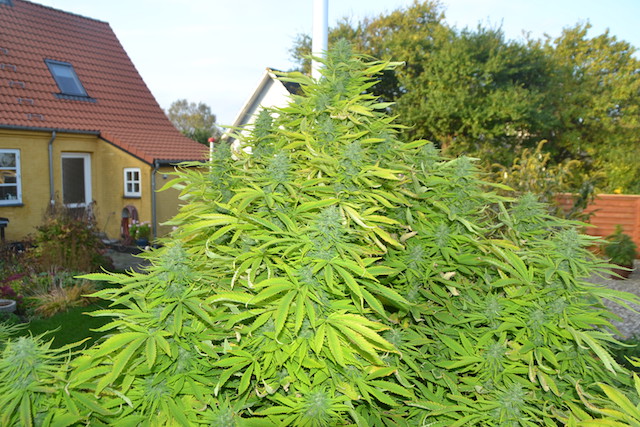 “Finally, about mid October, I figured that the time was right to harvest. I had stopped the Bloom fertilizer a few weeks before, and switched to adding some GHE Ripen, to speed up the final maturing, as weather went from bad to worse.

There was an abundance of lovely buds. Not all as firm as I would have preferred, but considering the conditions we had endured – every bud in the jar would be a small victory in itself. I ended up harvesting 465 grams of dry bud, plus a good box of small popcorn-buds for cookies.

I must admit that when I planned the grow, and during the promising spring and early summer, my hopes were a great deal higher, but looking back, I am grateful for my wise choice of Frisian Dew genetics, which made the overall yield in the Autumn/Fall much bigger – especially with the difficult weather which was hurting the second batch of autos. This won’t be my last grow of this kind – for sure!

My idea for next summer is a few well selected females in the best spots around the garden, and then a midsummer bunch of autos, to give them their optimal conditions.” 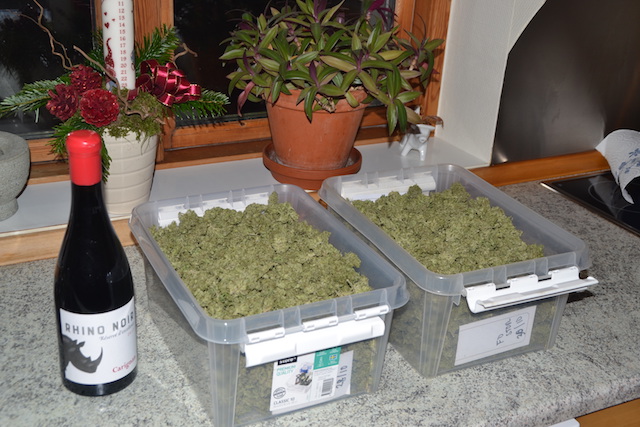 “Oh, and what about the quality you ask? Well, when rolling a few spliffs of the newly dried bud, to bring to an evening of card playing with some of my oldest friends, I wondered that too.

When I saw their grins, and when the evening was more fun and laughter, and talking about the old days all at once, I knew that the whole ordeal had been worth my while.”

If you are looking for some proven, tough outdoor cannabis seeds then buy some feminized Frisian Dew seeds online. The genetics have thousands of repeat growers all around the world, they are bred to deliver THC rich outdoor crops no matter how difficult the growing conditions.